The North Warren Regional Board of Education and its Administrative Leadership Team have joined with a statewide coalition of school districts who are negatively impacted by the reduction in state school aid resulting from P.L. 2018, Chapter 67. This coalition of schools will be bringing their message and concerns to state lawmakers and the public about the severe and negative impact that the state aid reduction will have on students, educational programming, and the tax payers in their districts. Currently, there are sixty-two (62) districts statewide, representing school districts from (14) counties and 117,000 students who have joined the “Support Our Students” coalition.

These drastic cuts are in stark contrast to North Warren’s standing as an “over efficient” District. The New Jersey Department of Education repeatedly recognizes North Warren as a leader in Taxpayer Guide to Education Spending efficiency metrics. Most notably, North Warren is the most efficient regional high school District in the tri-county (Warren, Sussex, Hunterdon) region, having the lowest cost per pupil of any regional high school district in the local area.

At its December 10, 2018 Board of Education meeting, the Board adopted a resolution advocating for immediate changes to current school funding laws. The North Warren Regional Board of Education calls on the members of all local township committees to stand with the Board of Education and call on state lawmakers to freeze further reductions to state aid allocations until a joint legislative committee is convened to address this funding crisis. At that time, the Board would ask local and state lawmakers to work together to find a viable solution that benefits all stakeholders and especially our students. 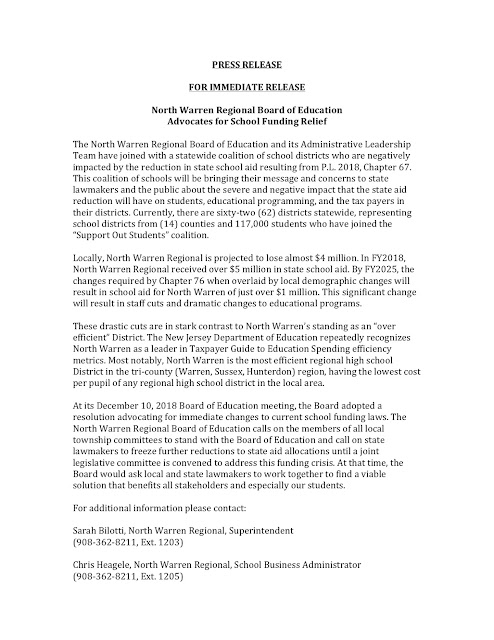